U.S. President Trump wants to end the nuclear agreement (pdf) with Iran and wants to eliminated Iranian forces in Syria which support the Syrian government. Something is being prepared to make that happen.

Last week General Joseph Votel, commander of CENTCOM – the U.S. military command for the Middle East, was in Israel. It was the first ever visit of a CENTCOM commander to Israel which usually works with the European command EUCOM.

Yesterday former CIA director and now Secretary of State Pompeo visited Israel. A few hours later Israel bombed two ammunition depots in Syria which are supposedly related to Iran. This was a clear attempt to provoke Iran into some reaction.

The Israeli defense minister Lieberman just visited Washington DC and only today came back to Israel.

Now the Israeli Prime Minister Netanyahoo loudly announced that he will hold a press conference to present a “huge amount of new and dramatic information on the Iranian nuclear program”. He will allege that Iran cheats on the nuclear agreement (JCPOA). 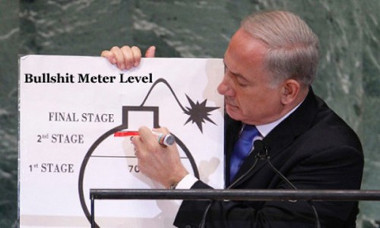 Netanyahoo is a notorious liar and warmonger. In September 2002 he lied (vid) to the U.S. congress:

Only yesterday he promoted a false story that claimed Arabs in Israel had disrupted a minuted of silence for some people killed in a flash flood.

The IAEA says that Iran is in full compliance with the JCPOA. If there were any serious intelligence about any Iranian deviation from the nuclear agreement it would be presented to the IAEA and the six signature powers of the agreement. The IAEA would investigate and report back. If Iran cheated it would be put back under serious international sanctions. That Netanyahoo wants to present something publicly makes it very likely that he has nothing of relevance.

We hear that the documents he is said to present were compiled by one Christopher Steele and assembled with the help of one Sergej Skripal and his MI6 handler [redacted]. They will show that Iran attempts to buy yellowcake uranium from Niger.

This new comedy stunt by Netanyahoo is tightly coordinated with the Trump administration.  Trump’s national security advisor John Bolton has worked with the Zionists since early 2000 to push for a war on Iran:

During multiple trips to Israel, Bolton had unannounced meetings, including with the head of Mossad, Meir Dagan, without the usual reporting cable to the secretary of state and other relevant offices. Judging from that report on an early Bolton visit, those meetings clearly dealt with a joint strategy on how to bring about political conditions for an eventual U.S. strike against Iran.

Behind Trump, Netanyahoo and Bolton is one financier, the militant Zionist and casino magnate Sheldon Adelson. He financed Trump’s and Netanyahoo’s election campaigns and the various think tanks that create anti-Iranian propaganda and paid Bolton. 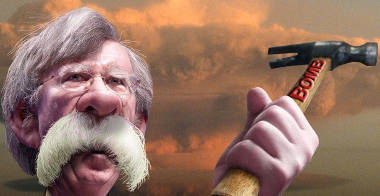 bigger
Trump wants to leave the nuclear agreement but the other signers, China, Russia, the UK, France and Germany want to keep it up. Just leaving the JCPOA without cause will increase doubt over any agreement the U.S. wants to make on other issues. The allegations Netanyahoo will put forward, no matter how ridiculous they may be, could give Trump some excuse to put new sanctions on Iran without actually leaving the agreement.

But even that does not explain all the recent meetings and visits by the various Israeli and U.S. officials. French soldiers and mercenaries from the UAE have entered north-east-Syria. What for? The Saudis are on board with any operation against Iran. 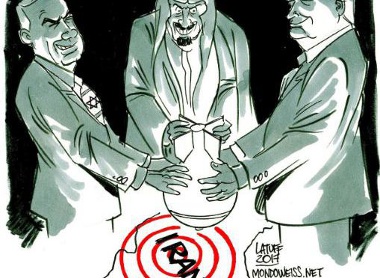 Something big is up and we do not know yet what it might be.

That was lame. Netanyahoo just finished his show (vid). He claimed that Israel got access to an Iranian archive of its former nuclear program dating from 1999 to 2003. In 2007 a U.S. National Intelligence Estimate found that Iran stopped all nuclear weapon research in 2003 after the U.S. had destroyed Iran’s then arch-enemy Iraq. In 2011 the IAEA reported in detail of Iran’s former “structured program”. It agreed that it had stopped in 2003.

All that Netanyahoo now claims to have acquired is old and known stuff. He refers to an AMAD plan Iran had as if that was some new intelligence. But the IAEA documented AMAD and its development in 2011 (PDF, Annex, page 5). He uses the archive documents of known former programs to declare that Iran has cheated and is not trustworthy. He says that gives Trump reason to disavow the nuclear agreement the U.S. and others had signed with Iran. That is bullshit.

I had expected better from him. Some well forged documents or something more dramatic. This was just nonsense.

My feeling is that this was a diversion from an upcoming military(?) operation against Iran or its assets in Lebanon, Syria or Iraq.